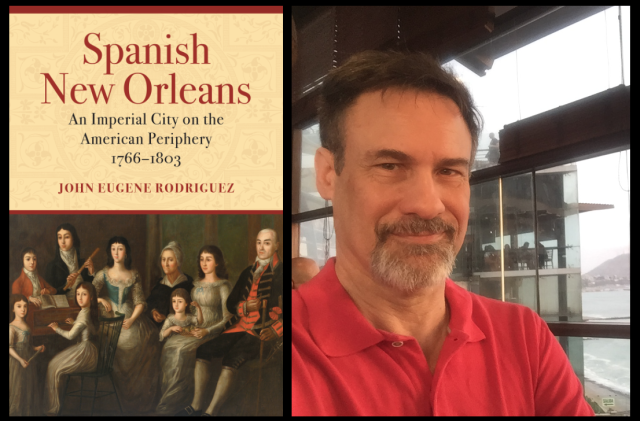 Join us from 6:00 p.m. – 7:30 p.m. CDT for an evening with author John Eugene Rodriguez as he explores the history of Spanish rule in Louisiana and discusses his recent book, Spanish New Orleans: An Imperial City on the American Periphery, 1766–1803 (LSU Press, 2021). This program is sponsored by Friends of the Cabildo as part of the Second Thursday Lecture Series. It is free and open to the public, but registration is required. The program will take place on Zoom. Please register here:  https://forms.gle/TZ7iEdH7KNYV4ivv6

John Eugene Rodriguez’s Spanish New Orleans is the first comprehensive academic analysis of how Spain governed the largest imperial city in its North American empire. Rodriguez suggests that the Spanish empire was, at least on the northern edge, slipping into economic and perhaps political independence a decade before the overthrow of its Bourbon Spanish rulers in 1808. His work questions that of earlier historians, who argued that Latin America was fundamentally conservative and complacent under Bourbon rule. Instead, Spanish New Orleans shows that in the capital of Louisiana, Spanish rulers were slowly losing control of three interwoven aspects of the city: demography, trade, and political discourse.

Rodriguez demonstrates how the multiethnic, multilingual population of the city played a central role in encouraging trans-imperial free trade and especially trade with the United States, to the point of economic dependence. This dependence in turn prompted the Bourbon governors in New Orleans to negotiate both economic and political discourse in a city that was steadily moving closer in every way to the United States. Far from being a peripheral city in a peripheral colony, by 1803 New Orleans was reshaping the Spanish empire beyond the comprehension of the Spanish king. Chapters on the city’s foundational merchants, literacy, and the judicial system all point to the unique character of this imperial city on the American periphery.

This study marks new methodological paths for historians of Latin America and early U.S. history by making use of enormous data compilations on population, ethnicity, and economics. Rodriguez also analyzes previously ignored eighteenth-century Spanish-language documents, including petitions, postal records, and military rosters, and engages underutilized tools such as signature analysis. Through his use of original sources and innovative methodologies, Rodriguez makes new and intriguing comparisons between New Orleans and other contemporary Spanish imperial cities as well as cities in the then-expanding United States.

In Spanish New Orleans, Rodriguez goes beyond simply positioning New Orleans within Spanish imperial history. Taking a broader view, he considers what Spanish New Orleans reveals about the challenges and opportunities faced by the Spanish Bourbon empire, and he sheds light on how a new North American empire could so quickly and easily absorb a Spanish city.

Dr. John Eugene Rodriguez has been an offshore oilfield clerk, industrial electronics salesman, naval officer, shipyard instructor, senate staffer, and longtime civil servant. Since leaving New Orleans, he has worked for the Naval Criminal Investigative Service (NCIS), the Defense Intelligence Agency (DIA), the Joint Chiefs of Staff (JCS), and now the Office of the Director of National Intelligence (ODNI) and has traveled to or worked in nearly sixty nations. He is currently a professor at the ODNI's National Intelligence University in Bethesda, Maryland.